Plastic and esthetic surgeon in Tunisia

Mammary hypoplasia is defined as a breast volume which is insufficiently developed in proportion to the patienta��s morphology. It can be a pre-existing condition (small breasts from puberty) or appear later, after substantial weight-loss, a pregnancy followed by breast-feeding, or hormonal problems.
It can occur alone or be associated with ptosis, that is sagging of the breasts and skin stretching and a lowered areola.
The great majority of implants used in France and elsewhere in the world are pre-filled silicone gel implants.
These implants, are very close to the consistency of a normal breast.
The most important points concerning the new generation of implants, which ensure their safety, are the new improved envelopes and the gel itself.
The shells, which are now stronger, prevent any leakage of gel (which was a cause of capsule formation) and have much greater resistance over time.
a�? BEFORE THE PROCEDURE

A thorough preoperative examination with blood tests will be carried out as prescribed.
An anesthesiologist will see you in consultation at the latest 48 hours before the operation. In addition to the usual preoperative tests it can be helpful to use medical imagery, (mammography, echography).
No aspirin-based medication should be taken during the 10 days preceding the operation.
You will probably be asked not to eat or drink anything for six hours before the operation.

a�? HOSPITAL STAY AND TYPE OF ANESTHESIA

Type of anesthesia
This is usually classic general anesthesia, you will sleep throughout the operation. Rarely a�?twilighta�� anesthesia is used (local anesthesia with intravenous sedation), this can be discussed with the surgeon and anesthesiologist.

Each surgeon has adopted his or her own specific technique, which he or she adapts in order to obtain the best results in each case.
We can however give some basic points:
The incisions 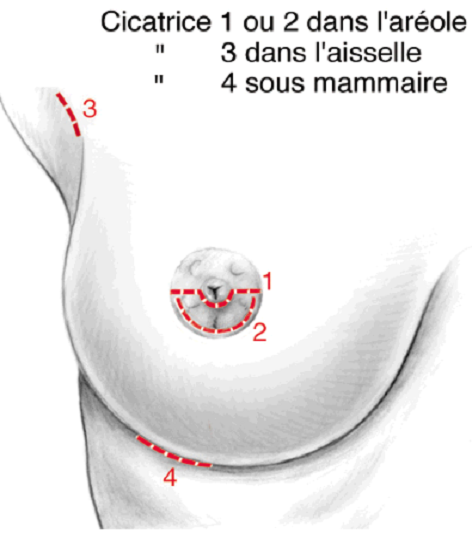 These incisions correspond of course to the position of future scars which will thus be hidden in natural folds or lines.
Sacars: 1 or 2 in the areola, scar 3 in the armpit, scar 4 in the inframammary fold

The position of the implant 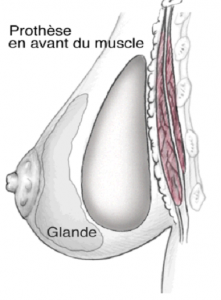 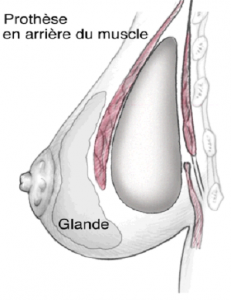 The choice of position will have been determined in consultation with the surgeon.
a�? AFTER THE OPERATION

There can be pain for the first few days after the procedure, particularly when the implant is large and/or placed behind the muscle. In this case pain medication of the strenth necessary to dull the pain, is prescribed for several days.
Even if there is no pain there will be a strong sensation of tightness.
a�? THE RESULT

This can be truly seen from two to three months after surgery, the time necessary for the breasts to become softer and for the implants to settle. The procedure will have improved not only the volume but the shape of the breasts.

All things considered, the risks must not be overestimated, but you must be conscious that an operation, even a minor one, always has some degree of unknown factors.
You can be assured that if you are operated on by a qualified Plastic Surgeon, he will have the experience and skill requires to avoid these complications, or to treat them successfully if necessary.